The first race of the season is always an important one – a crucial gauge of training and form, and a guide for what needs to be done ahead of the season’s bigger goals and milestones.

For Team Spur’s Swiss machine, Ariane Lüthi the first race of the year hasÂ traditionally been the gruelling 121km Fairview Attakwas Extreme MTB Challenge, from Oudtshoorn to Great Brak. This year the team’s new recruit Alan Hatherly also made his debut at the event, taking on the Spur Atta Mini over 52km.

After a tough day out, Ariane soldiered to a very credible fourth place among a stellar UCI women’s field, while Alan took the win over the shorter route. Here’s how it all went down.

Alan Hatherly
Alan outgunned Dominik Buksa and Tristan Nortje to take the win at the Spur Atta Mini in a time of 01:52:45. “It was a great warm-up for me for the season, for sure,” said the Olympian and reigning U23 African XCO Champion after the event. “Coming straight out of base training it was a good test for the up-coming races.”

While Alan will focus on the XCO discipline in 2017 he will race a selection of longer events, including the Ashburton National MTB Series opener in Grabouw on Saturday, 28 January where he will contest the 72km distance. “I opted for the Mini because it’s obviously a shorter, more explosive race and will help me prepare for [the Ashburton event] next weekend,” he said.

“It was a really good day out. The route rode fast – quite a bit faster than expected – and everything went smoothly with the new S-Works Epic, so I’m very happy. I’m looking forward to next weekend and the rest of the year.” 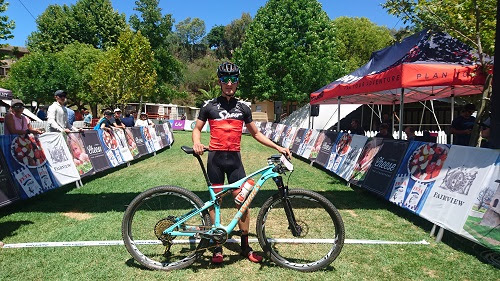 Ariane Lüthi
As a five-time winner at what is considered one of the toughest one-day races in South Africa, Ariane was eager to reclaim her title. The 2017 edition was a UCI-rated World Marathon Series event and Ariane found herself up against the strongest field ever assembled in the 121km point-to-point race. Also, having missed two weeks of crucial training in the build up due to injury she wasn’t on the start line with the same amount of hours in the legs as in the past.

After a bit of a setback a-third-of-the-way through, Ariane found her legs in the last 40km and grafted her way to a respectable fourth place behind her 2016 Absa Cape Epic partner and reigning XCO World Champion, Annika Langvad, South African XCM Champion and 2016 winner, Robyn de Groot and Swedish XCM Champion, Jennie Stenerhag.

“It was great to have our own start batch for the first time in many years,” Ariane said afterwards. While the UCI Men started a minute ahead of the UCI Women, the A-batch men started only three minutes back, which meant the strongest amateur men caught the women at about the 30km mark.

“Annika, Robyn, Jenny and myself were together, with Amy [Beth McDougall] not too far back,” Ariane explained. “We got into a bit of a mess there when the A-batch men caught and overtook us, because they didn’t really pull away. Whenever there was a technical section we would reel them back in. Annika got fed up with this and rode away! My legs didn’t agree with that so I fell back a bit and had to ride my own pace from there.”

Ariane believes the decision to focus on her own race was probably her saving grace: “I think if I had tried to stick to Annika for much longer you probably would’ve seen a big mushroom cloud above the Attakwas,” she joked.

On one of the steep, rocky climbs (for which this race is famous) deep in the Attakwaskloof, Amy Beth McDougall caught and passed Ariane. This provided the proverbial ‘carrot’ for her to chase.

“I thought maybe she had gone too hard early on and held hope that I could catch her. This happened at about 70km on the rolling gravel road. I managed to ride away from her there and could put my head down and time-trial the last 40km to the finish,” she said, before adding, “that 40km into the headwind was actually good. It was good to see how fast and hard I could go there.”

“Annika, Robyn and Jenny were definitely stronger than me on the day, a huge congratulations to them. I went the hardest I could and left it all out there. I haven’t done a lot of racing-like training so this was part of the reason for racing Attakwas – to get racing fit.”

“There is a lot of work to be done ahead of the Absa Cape Epic,” she said. “I trust my coach and we will get the work done. It is going to be a challenging Epic, but I firmly believe I will get into the shape to be able to win it.”